GOVERNMENT TO TACKLE FLOODING IN ACCRA 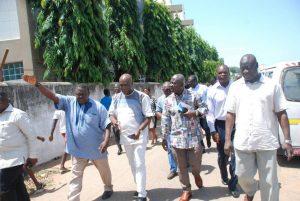 The Honorable Minister of Works and Housing, Samuel Atta Akyea, has assured Ghanaians that the Government will do all it can to end the vicious cycle of rain induced flooding in Accra.

He said to bring an end to this cycle, the President has allocated an amount of GHC 200 million to augment the GHC 17.3 million budget allocation of the Ministry.

In addition, the World Bank has agreed to assist Government to tackle the situation with a commitment of an additional US$ 100 million.

The Honorable Minister had this revelation when he was addressing the media at the conference room of the Ministry after an inspection tour of some flood prone areas and drainages in Accra to assess the state of the facilities ahead of the rainy season.

He said the Government would bring in international civil engineering and construction firms through a competitive bidding process to partner local engineers to implement the flood and drainage management developed plan by the Ministry. He added that details of the contract were being worked out and this would include cost, scope and duration after which it would be sent to Parliament for approval.

He said President Akufo-Addo, wants to end the adhoc measures adopted in tackling the country’s drainage problems by constructing underground drains and expressed the hope that the project would be worth pursuing by successive governments.

According to the Minister, as part of the President’s legacy, for Ghana to permanently tackle, the flooding situation in Ghana, which has been in existence since 1959.

Mr. Atta Akyea, further assured citizens that desilting of drains, particularly the Odaw River, would continue, to ensure free flow of rain induced flooding, saying the Ministry is determined to ensure that this permanent arrangement is embarked on with a backdrop of a larger solution.